The final report from the workshop in Atacama, Chile, is finally out! The Renaissance project has the main goal of developing energy communities with environmental, economic and social benefits to its members, involving the generation of renewable energy by the community and for the community in a truly cooperative manner. With their experience from pilots of this community-driven approach in different places in Europe and America, the project from the University of Brussels seemed a great fit to contribute the social scientific aspects needed for the telescope’s design study. Bringing these two European projects together was a perfect match – AtLAST with the necessary energetical and astronomical background knowledge and Renaissance with their experience working with local communities on renewable energy topics.

First steps – Development of a survey on renewable energies

In December 2021, the team visited San Pedro de Atacama and generated the first contact with different actors in this place: observatories, municipality and local people.

Soon after, a MAMCA survey was distributed amongst the stakeholders in the area, whose purpose was to capture their opinion about energy consumption and their priorities. In this instance he noted how difficult it was to contact all the existing communities and other stakeholders due to isolation and remoteness.

Four main stakeholders were identified in San Pedro de Atacama and its surroundings. The first one was the observatories located at Chajnantor Plateau, obtaining valuable responses from the Atacama Large Millimeter/Submillimeter Array (ALMA), the Atacama Pathfinder Experiment (APEX), the Simons Array, the National Astronomical Observatory of Japan (NAOJ), and the University of Tokyo Atacama Observatory (TAO). The second group considered was the municipality of San Pedro de Atacama, which was represented by people from the communal planning office, SECPLA. The third considered stakeholder is made up of local people, including restaurants, schools, hotels, stores, and residents. The last stakeholder consists of the local energy supplier, called Cooperativa Eléctrica de San Pedro de Atacama (CESPA), which is currently in charge of providing electricity to San Pedro de Atacama and other adjacent communities.

Even though everything was organized from the other side of the world, in Brussels and Norway, with the resulting challenges due to the distance and the time difference, about 50 responses were collected from this survey. According to Renaissance’s prior experiences, this is a good number.

Preparation of the workshops

While survey responses came in, the busy prep work for the workshops started moving: inviting the different stakeholders, solving logistic issues (place for the workshop and catering service), and preparing the results as well as the presentation for the workshop. Marianne and Guillermo were in charge of the first two tasks, organizing two workshops to cover all the considered stakeholders. The first workshop was planned for July 5th at Hotel Diego de Almagro, and was focused on the participation of observatories, local people, and CESPA, while the second workshop was planned for July 7th at the municipality of San Pedro de Atacama, focusing on the local authorities.

At the same time, Luis, Maria and the Renaissance team were working on the modeling and simulation of the energy system, including the results obtained from the survey. They based their calculation on previous work on energy demands and cost predictions presented by Isabelle Viole and Guillermo Valenzuela in the 6th International Hybrid Power System Workshop, in Madeira, Portugal. In this work, they compared different scenarios to meet the electricity demand of AtLAST and the town of San Pedro de Atacama, such as using a renewable energy system based on photovoltaic and energy storage components, and a hybrid energy system also including a diesel generator. They obtained that the cost-optimal solution is a hybrid system which runs on PV and batteries for almost 95% of the time. Compared to pure diesel systems running in the area today, this will reduce the carbon footprint by about 97%.

Everything was ready, and the time of the workshops arrived.

Luis and Maria started with the presentation and everything went as planned: the different actors discussed and participated lively in the workshop. Important take-aways for the observatories included the utter importance of reliability to avoid blackouts, while they were also worried about the costs of the system. Participants from the local population underlined their preference for replicable systems, that means they would like renewable energy systems whose design can be applied not only in San Pedro de Atacama, but also in other remote areas. This would allow for a cheaper adaptation of renewable energies in many rural areas in South America. CESPA highlighted the need for cooperation among actors as a key element for a larger system and invited all observatories to have a discussion about their potential integration into CESPA’s power system.

As the first workshop came to an end, the team was enthusiastic about achieving the goal of discussing the development of renewable energy communities and listening to the opinions of many stakeholders in San Pedro de Atacama.

After a day of preparation, the second workshop on renewable energies took place on July 7th. Taking with them the experience from the prior stakeholder meeting, and focusing solely on only one actor this time, the team gained a deep understanding of the needs and wishes of the local authorities. They gathered that important criteria for this stakeholder include the education of the communities on energy matters, next to the reduction of the energy bill and greenhouse gas emissions. It was decided to stay in close contact about community involvement in the energy side of the AtLAST project.

Taking many insights and good contacts to local stakeholders home with them, they had successfully completed one of AtLAST’s milestones, namely, Meeting to discuss the project and the community expectations.

Open in a new tab 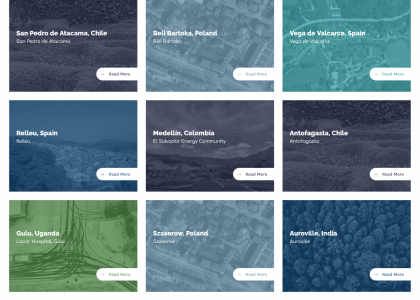 by Rebecca Hueting, dissemination team @ Deep Blue Italy Since the beginning of the project our research team planned to test and replicate…