The final report on social acceptance is finally out today! The “Survey on social acceptance of RENAISSANCE solutions” was designed to assess the social aspects influencing the acceptance of renewables, including local energy generation technologies. Moreover, the survey promoted awareness of renewable energy generation systems and of regulatory measures activated in the European Union to facilitate the energy transition. Its main objective was to compare awareness and acceptance levels and track how they changed over time, across different segments of respondents,  distributed primarily in 5 European countries. To this aim the survey has been translated into six different European languages and its distribution was planned in three different phases of the project. The full description of the structure and methodology is included in the first sections of the report (Sec. 3 and Sec. 4).

A first version of the survey was distributed in early 2020 and it offered insights from the early stages of implementation of RENAISSANCE solutions. The results are presented in the RENAISSANCE First Glossy Report1 and represent a baseline both for general awareness
and acceptance of recent European energy directives and of the specific solutions proposed by RENAISSANCE. Click on the button below to download the previous version of the Glossy Report “Social acceptance survey about RENAISSANCE solutions”

The survey was distributed a second time through the online tool Survey Monkey in late 2020, focusing on pilot sites and also promoted through project social media and newsletter. This time the survey focused on the perception and opinion of a broader range of the general public, in order to assess if and how their attitude showed substantial changes. The results helped evaluating and fine tuning of the communication and stakeholder engagement strategy during the core phase of the project.

Towards the final phase of the project in December 2021 the survey was distributed once again to a wider public beeyond pilot sites and project stakeholders, in order to gather insights about differences and changes in the overall awareness and acceptance levels of renewable solutions and of the RENAISSANCE approach and business models. The responses were collected through the online tool Survey Monkey. More specifically, the pool of paid responses came from the five countries in which we deployed the project’s approach: Greece, Spain, Belgium, Poland and the Netherlands. Whilst on one hand respondents not directly involved in the project were expected to show unvaried trends, on the other those participating in pilot sites activities and all other involved actors (ESG members, project’s followers, researchers) were predicted to disclose higher levels of awareness and interest. The full statistical analysis, including the comparison with previous results, is presented in the core section of the report (Sec. 5).

While collecting responses at the European level, the research team collected and analysed the latest responses received from pilot sites’ respondents between December 2020 and December 2021. In particular, the Greek pilot emerged as the most committed to the project research and participation in numbers was much higher in Greece than in other countries. In order to convey the Greek respondents’ opinion and that of other European pilots in a comparative analysis, two dedicated sections have been added to the report (Sec.6 and Sec.7).

Within the RENAISSANCE project context, in addition to technical and economic aspects, it is deemed essential to include an analysis of related social aspects. The socio-economic context and the quality and quantity of information received strongly influence the acceptance of clean technologies and measures, including renewable energy generation technologies. Technologies that are technically and economically feasible in a given context may not be successfully implemented due to social resistance, lack of awareness of the technology, low engagement and so forth. The RENAISSANCE survey on social acceptance of potential end-users (pilot sites inhabitants, stakeholders, further energy market actors involved) had a two-fold objective: identifying end-users’ needs and concerns while also offering an initial set of information which can guide them through the energy transition process.

Click on the button below to download the last version of the Glossy Report “Energy communities survey: fostering social-acceptance beyond project stakeholders”:

Explore all our resources published on our website, including press releases, deliverables, interactive contents and scientific papers: 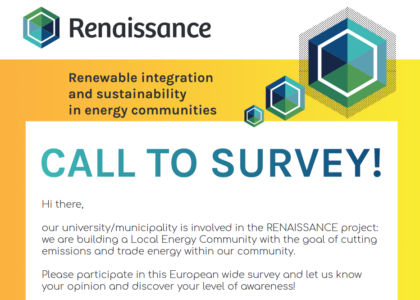 by Rebecca Hueting – Dissemination Team, DEEP BLUE Italy   We are glad to announce that a second launch of our RENAISSANCE survey… 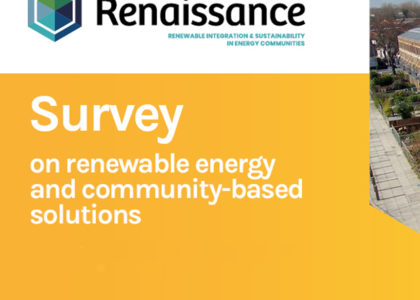 by Margherita Minissi and Rebecca Hueting – Dissemination Team, DEEP BLUE Italy   How much do you know about renewable energy communities? Renewable… 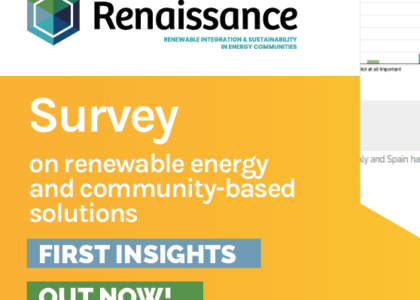 by Margherita Minissi and Rebecca Hueting – Dissemination Team, DEEP BLUE Italy   After one month since its launch, some first insights about…